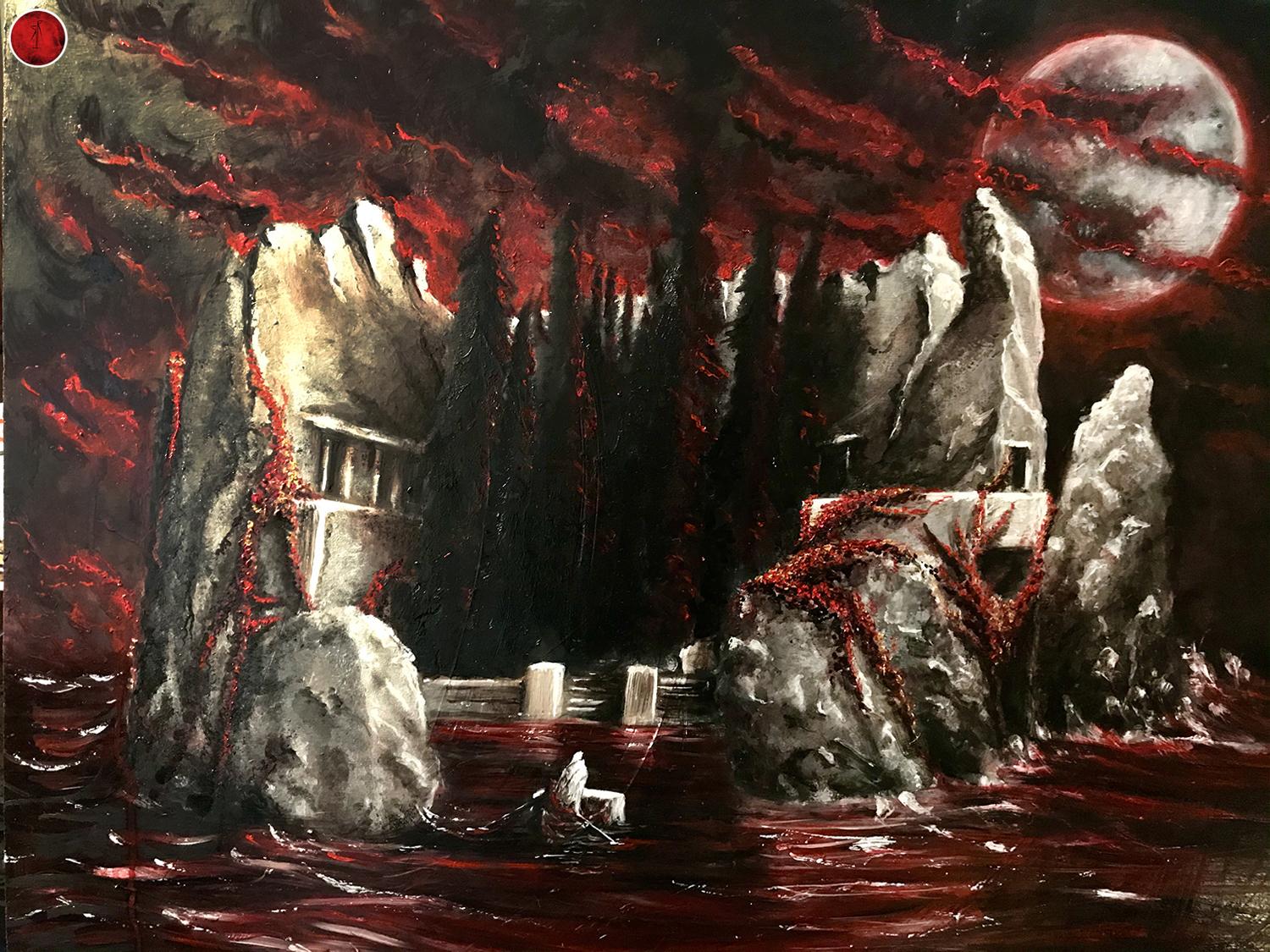 For some time, I had been thinking about proposing my own re-interpretation of this painting, of which the author himself produced various versions.

At first, I thought of a quote and sketched the island on the horizon of a black sea: I wanted it to be there, to represent a point of arrival, a destination for someone who, in the foreground, would slowly approach on a boat; but the more I sketched out, the more the island grew, I could not center the size and it grew and grew.

When I finally felt satisfied, I didn’t realize that she had taken the whole table and, as is my custom, I let her be in charge and from a quote it became a tribute.

My “Die Toteninsel” – I like to call it by its name in the original language – towers mightily over in the middle of the black sea that reflects a red and cloudy sky, as if it were about to rain blood soon; but the gray stone of the rock refuses to accept that reflection and maintains its cold otherworldly flash.

The gray walls of rock surround a dense thicket of darker than normal cypresses: they do not reflect the light, but absorb it and stand upright and judging. They represent the element that has always captured my eye: the dark, the unknown.

The island appears gloomy and disturbing also for another detail: the climbing red ivy that seems to be groping it like a parasite that come from who knows where and this is a quote from “The War of the Worlds” by H.G. Wells that I had recently re-read.

That climbing plant has always impressed me, it’s a kind of “Red Death” if you think about it. He is often seen along the walls of abandoned houses or tangled in dead trees and light poles, he suffocates the banks infested with brambles, coloring the hill with that anomalous dry red and gray that makes me think of the imminent arrival of winter.

Böcklin was so obsessed with the “Island of the Dead” theme that he painted it 5 times.

The first version seems to be titled “A quiet place”, then changed the title.

In fact, what the painter’s Island of the dead conveys to a feeling of restless tranquility.

Although, that subject does not “ring” to my ears when I look at it, I only hear silence and every now and then we all need silence, that’s why I like it.

I can’t match either my version to a musical mood, but while Böcklin communicates tranquility, calm and silence to me, mine communicates a silent restlessness, an omen…

These days the painting will be varnished and framed and will finally be ready to go.

I liked measuring myself with the classic themes and I think it won’t be long before the next tribute.

Do you have any suggestions?

Which painting would you like to see reinterpreted in RRH style?

Go to the picture tab

This site uses Akismet to reduce spam. Learn how your comment data is processed.